Use this chart as a guide to determine which vaccines are required to enroll in child care, early childhood programs, and school (public or private).

Find the child’s age/grade level and look to see if your child had the number of shots shown by the checkmarks under each vaccine. 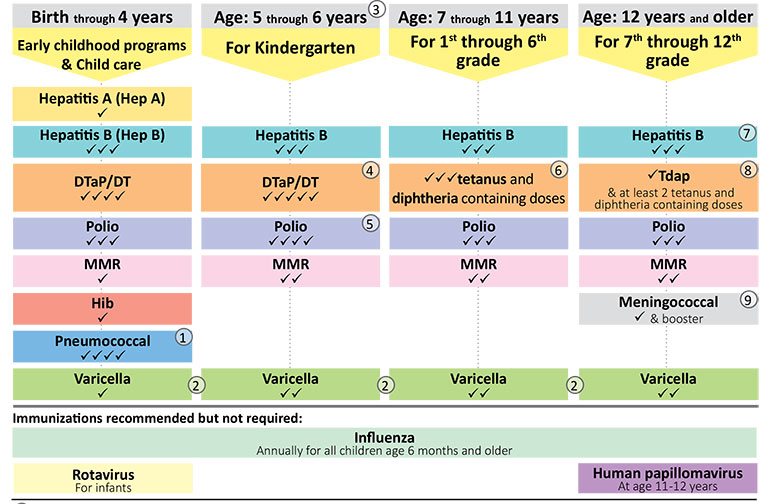 1 - Not required after 24 months
2 - If the child has already had chickenpox disease, varicella shots are not required. If the disease occurred after 2010, the child’s doctor must sign a form confirming disease.
*3 - First graders who are 6 years old and younger must follow the polio and DTaP/DT schedules for kindergarten.
*4 - Fifth shot of DTaP not needed if fourth shot was after age 4. Final dose of DTaP on or after age 4.
*5 - Fourth shot of polio not needed if third shot was after age 4. Final dose of polio on or after age 4.
*6 - Need proof of at least three tetanus and diphtheria containing doses. If up to date on DTaP/DT series, no additional doses needed.
*7 - An alternate two-shot schedule of hepatitis B may also be used for kids age 11 through 15 years.
*8 - One dose of Tdap is required beginning at 7th grade. Also need proof of at least two tetanus and diphtheria containing doses (DTaP/DT/Td). If a child received Tdap prior to 7th grade, another dose of Tdap is not needed.
*9 - One dose is required beginning at 7th grade. The booster dose is usually given at 16 years.

To enroll in child care, early childhood programs, and school in Minnesota, children must show they’ve had these immunizations or file a legal exemption.