Neal graduated from Upsala High School in 1955 as a two-sport athlete, starring in both baseball and basketball. Neal was a gifted athlete and an exceptional player.

In baseball he was a five-year varsity starter and all-conference player at shortstop, drawing the interest of at least one Major League scout. He also played on the Upsala baseball town team for about 15 years, consistently leading the team in hitting and stolen bases. His successes with the town team led Neal to be recognized at the State Amateur level for his outstanding play.

In basketball, Neal was a four-year starter. His senior year he was a co-captain and was named to the all-conference team. In 1955 Neal was the first player to ever lead the basketball team onto the new gym floor (which, of course, is now our old gym). The team inaugurated that floor with a big win against Pequot Lakes.

An interesting bit of trivia about Neal is that while listening to professional games on the radio he heard about a method of shooting called a "jump shot". So in 1954 in a game against Browerville, Neal performed the first jump shot in Upsala. It was said the crowd went wild — they'd never seen one before. His new technique was captured in a picture in the 1954 yearbook.

After graduating Neal joined the US Navy and served from 1956-1957. After the Navy he joined his brothers in working at Swanson Concrete in the Twin Cities. In 1966 he attended ECPI College of Technology and graduated with a degree in computer programming. After graduating, Neal worked for Honeywell as a computer operations manager until retiring in 1993. Neal and his wife, Bernie, currently live in New Hope. 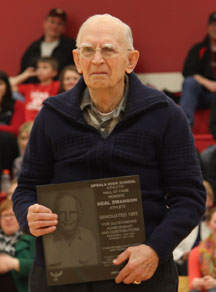