The daughter of Dan and Vickie Pangrac of Upsala, Kristi graduated from Upsala High School in 2003 and competed in volleyball. Kristi was a dominant player with the competitive drive and willingness to work well beyond what others would do to improve their skills. She started and starred as a sophomore on the first Upsala School sports team in history to reach the state tournament: the 2000 volleyball team.

Kristi also made school history as an individual, becoming the first volleyball player to reach 1,000 kills, ending her career with 1,011. She was also an aggressive blocker and finished as the career leader in blocks. In 2002 Kristi was selected to the All-State volleyball team and was named both the Prairie Conference and Team MVP in 2001 and 2002. During her three years as a starter, the Cardinals volleyball team was undefeated in Conference play, winning all 36 games while amassing an amazing record of 113 – 1 in sets played.

After graduating from high school, Kristi attended St. Cloud State on an athletic scholarship. There she excelled in volleyball and was a three-year starter. As a Huskie, Kristi was chosen to the North Central All-Conference and All-North Central Region teams in 2006 and also made the Academic Honor Team. She ended her career at SCSU ranked 12th all-time in kills per game and 12th all-time in attack percentage. Kristi graduated in 2007 with a degree in Aviation Operations and currently lives in Woodbury and works at Endeavor Airlines. 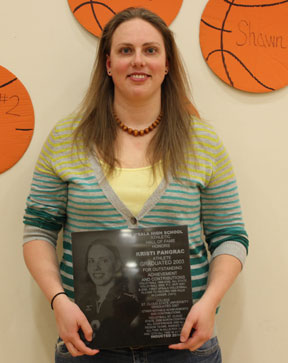